Philippa Curran named as Legal Aid Lawyer of the Year

PHILIPPA CURRAN NAMED AS LEGAL AID LAWYER OF THE YEAR 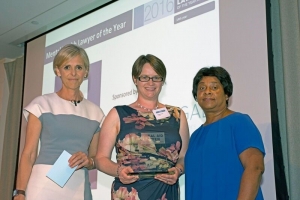 Philippa Curran, partner and head of the Court of Protection department at Preston firm, odonnells, has been announced the winner of the mental health category in the 2016 Legal Aid Lawyer of the Year (LALY) awards. Philippa was presented with her award by Baroness Doreen Lawrence OBE at a ceremony hosted by the Legal Aid Practitioners Group in London on 7 July 2016.

Philippa, who joined odonnells in 1998, specialises in mental health and mental capacity law. She has been instrumental in a number of developments in the Court of Protection, including the landmark case, known as “Cheshire West,” in which the Supreme Court defined what is meant by a deprivation of liberty and led to safeguards being put in place for thousands of people with dementia or learning disabilities. Her nomination was supported by judges, barristers, clients, advocates and experts instructed in her cases, and she was one of only three solicitors shortlisted in her category, and the only one from outside London.

“Every year, the LALY awards give us the chance to celebrate the life-changing, life-saving work of our profession. LAPG could not be more proud to host this event.”

“Philippa is regarded as one of the top mental capacity solicitors in the UK. She has a deep commitment to human rights which she combines with a sound business sense to provide a quality service to the most marginalised and vulnerable members of society. Her success has been critical to the expansion of the firm, with her department doubling in size over the last six months. She has spent her spare time promoting awareness and understanding of those with mental health problems, and she thoroughly deserves this recognition.”

“The range and quality of finalists this year illustrates not just the important legal aid work that is being done, but also the diversity of people who are drawn to this vital area of law.”

We are delighted for this recognition of Philippa’s hard work in an area of work which is often overlooked but is of vital importance to many people affected my mental ill-health and incapacity.